STR35: The Final Stand (Stronghold: On the Edge of Chaos)

This level occupies the map slot STR35. For other maps with a non-standard slot, see Category:Non-standard map slots.

STR35: The Final Stand is the thirty-fifth and final map of Stronghold: On the Edge of Chaos. It was designed by Daniel Gimmer (Tormentor667) and Icytux, and uses a custom music track.

This level combines the "Goals" and "Core" modes. You must prevent the monsters destroying two goals and a computer core placed throughout the level. 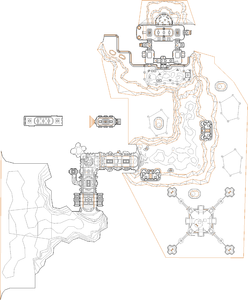 Map of The Final Stand
Letters in italics refer to marked spots on the map. Sector, thing, and linedef numbers in boldface are secrets which count toward the end-of-level tally.

Players start inside the bar in the main hub's entrance area; Lt. Carmack will brief you on the approaching threat. Immediately head south past the marines (who will assist you as long as they remain alive) and head outside to the training area to find a shotgun, chaingun, backpack and all four item pads; from here you can follow the path south and west to a ramp, leading down to the monsters' spawn point and additional ammo and health pads. There are also two small buildings on the path that contain weapon, powerup, health and ammo pads.

The monsters are targeting two orange goals near the top of the ramp; if both of these goals are destroyed then the monsters will begin targeting the core outside the main building, and will also start spawning halfway up the ramp. This mission has twenty waves featuring large numbers of monsters making it a test of endurance; retreating at low health is preferable to losing lives. The final wave will pit you against an Overmind and three Molochs which will spawn at the top of the ramp; throw every powerup you have at them, especially if they reduce damage received. Once the last monster is dead, you have completed Stronghold!

Just before you reach the item pads at the bottom of the ramp, look at the west wall to see a tunnel. Jump into it to find a super shield powerup.

* The vertex count without the effect of node building is 12726.