STR50: Duke it Out (Stronghold: On the Edge of Chaos)

This level occupies the map slot STR50. For other maps with a non-standard slot, see Category:Non-standard map slots.

STR50: Duke it Out is the first secret map of Stronghold: On the Edge of Chaos. It was designed by Chilvence and Daniel Gimmer (Tormentor667), and uses a remix of "Stalker" by Lee Jackson from Duke Nukem 3D.

This level uses the "Goals" mode. The objective is to prevent enemies from Duke Nukem killing all the captured babes. 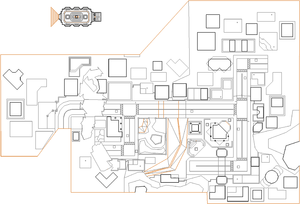 Map of Duke it Out
Letters in italics refer to marked spots on the map. Sector, thing, and linedef numbers in boldface are secrets which count toward the end-of-level tally.

This level is set in a Duke Nukem 3D-style city that contains 15 captured babes; you must stop the monsters killing all of them. All players start by a dark building near the center of the level; the weapon, ammo and health pads can be found around this building, while the powerup pad is in a walled structure to the south-west. A second ammo pad can be found in the south-west corner, near a small park area.

* The vertex count without the effect of node building is 2676.