STR52: City of Silence - Apocalypse (Stronghold: On the Edge of Chaos)

This level occupies the map slot STR52. For other maps with a non-standard slot, see Category:Non-standard map slots.

STR52: City of Silence - Apocalypse is the second secret map of Stronghold: On the Edge of Chaos. It was designed by Jason Farlow (farlowj) and Daniel Gimmer (Tormentor667), and uses a custom music track. 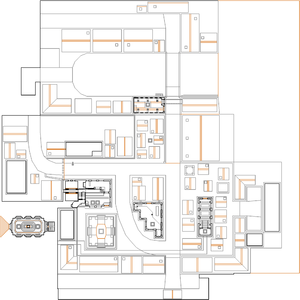 Map of City of Silence - Apocalypse
Letters in italics refer to marked spots on the map. Sector, thing, and linedef numbers in boldface are secrets which count toward the end-of-level tally.

The deadline is a flaming altar in the south-west corner of the level; you must not allow more than 100 monsters (several of which are taken from Blood) to reach it. Monsters will initially spawn from the south and east sides of the level, but from wave three they will also start spawning from the bridge at the north side of the level. The city will also darken, making it difficult to see oncoming enemies.

The delay between waves is longer than in most levels; learn where the item pads are located so you can reach them quickly.

A vampirism pickup can be found under the starting building. Head down the staircase to reach it.

There are two player seven starts but no player eight starts, so this map can only support a maximum of seven players. When seven players are present, the extra start will become a voodoo doll.

* The vertex count without the effect of node building is 3629.