STR54: Fortress of Damnation (Stronghold: On the Edge of Chaos)

This level occupies the map slot STR54. For other maps with a non-standard slot, see Category:Non-standard map slots.

STR54: Fortress of Damnation is the third secret map of Stronghold: On the Edge of Chaos. It was designed by Daniel Gimmer (Tormentor667) and uses a custom music track.

This level uses the "Goals" mode, where the objective is to prevent monsters destroying a series of targets. 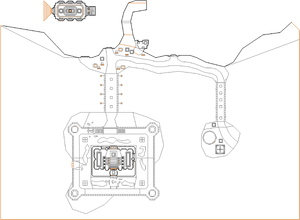 Map of Fortress of Damnation
Letters in italics refer to marked spots on the map. Sector, thing, and linedef numbers in boldface are secrets which count toward the end-of-level tally.

The monsters have two objectives to destroy in this level - first the landing area on the east side of the level, then the mission control by the start point. To reach the landing area the monsters must cross the bridge leading from the castle, then head east and south across a second bridge; this gives you plenty of opportunity to push them back and place obstacles in their path. Some marines will appear on the bridge and near the mission control at the start of the level; they will not last long but can kill some monsters for you.

* The vertex count without the effect of node building is 3910.