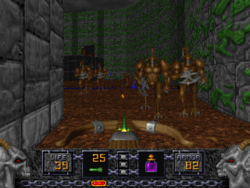 The sabreclaw is an enemy in Heretic that first appears in the second episode, Hell's Maw. Sabreclaws seem to be metallic, have no blood and explode when killed, but no information is given about their origins. They have no ranged attacks, but use their bladed tails and axe-bladed hands to slice into enemies; combined with their speed and the fact they are often encountered in groups, they can be dangerous to careless players.

Description from the manual: These hideous abominations of the dark world move bloody fast and possess deadly sharp blades for appendages. They can't fly and they can't shoot, but in close combat they'll tear you to ribbons.

Sabreclaws are harmless if you can keep some distance between you and them, or a barrier. They also have a very low mass meaning most weapon fire will knock them back, however they are quick to recover.

Sabreclaws' strength is their very low pain chance, which means that you can't reliably use the gauntlets without getting slashed. They can also be hard to stop if they corner you, so it's best to avoid it.

In the IWADs the sabreclaw is first encountered on these maps per skill level:

The IWADs contain the following numbers of sabreclaws per skill level: