Sacrifice (Doom Tutorial) (Sacrifco.wad) is a single-level PWAD for Doom II that came out in 1996. It was created by John Bye.

It is an improved version of Sacrifor.wad (contained in the same .zip file), which is itself a conversion of the unreleased Doom level Sacrif.wad. 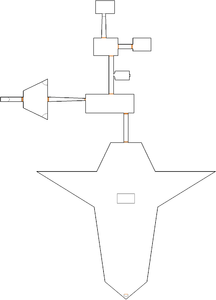 Map of Sacrifice (Doom Tutorial)
Letters in italics refer to marked spots on the map. Sector, thing, and linedef numbers in boldface are secrets which count toward the end-of-level tally.

* The vertex count without the effect of node building is 134.