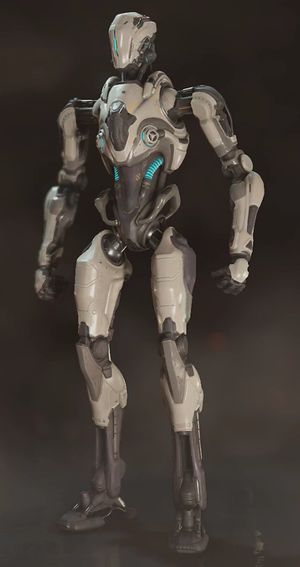 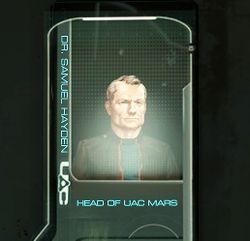 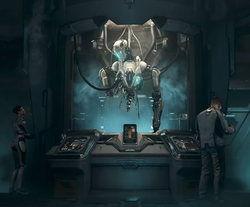 At some point between Doom (2016) and Doom Eternal, Samuel Hayden returned to Earth to find that the loss of Argent energy had plunged the planet into crisis. He appeared before the Allied Nations Council and recounted what had happened on Mars, presenting the demonic Crucible - now the only remaining source of Argent energy - and explaining that it might be possible to harness its power to synthesize a synthetic form of Argent. When Hell began its invasion of Earth, Hayden was asked to lead the newly-formed Armored Response Coalition and agreed to repurpose the UAC facilities under his control to manufacture weapons, mechs and other technologies to be used against the demons. Although Hayden's tactics and use of the Crucible slowed Hell's advance, the ARC found themselves overwhelmed; a final assault by Hayden, codenamed "Operation Hellbreaker", almost led to his destruction. His damaged torso was retrieved by ARC personnel and stored in the ARC Complex where it was maintained by a crew of scientists.

During Doom Eternal, the Doom Slayer travels to the ARC Complex to retrieve Hayden's body after learning from VEGA that he can assist in locating Deag Grav; having recovered the Crucible that was also stored in the complex, the Slayer ignores the ARC Intern's advice to carefully extract Hayden's torso from its enclosure and pulls it out in one go, before unceremoniously tossing the body into a slipgate when a marauder arrives. Once back on the Fortress of Doom, Hayden transferred his consciousness into the fortress' mainframe, allowing him to provide voice-over information to the Slayer during his journey.

Hayden also displays a great deal of unjustified knowledge about the Night Sentinels, the Maykrs, and Urdak, the latter being a heavenly dimension that Hayden himself stated no mortal or demon had ever set foot within (and thus he could not possibly have known about it by any normal means, let alone exhibit the familiarity with the realm that he displays). Furthermore, in the ARC Complex, one of the scientists states that Hayden's cortex is alien in design, a bizarre finding considering Hayden is supposedly of human origin. His mind is then uploaded into the Fortress of Doom's systems, which VEGA describes as having architecture "similar to his own"; as the Fortress was designed by the Maykrs and the Argenta, there is no explanation for how Hayden's supposedly human-made body could interface with it so easily.

The Ancient Gods, Part One confirms that he was in fact the Seraphim, having used a cloned human body to disguise himself at the Father's command in order to guide the foreseen development of Argent energy in a way that would give humanity a chance to oppose the power of Hell. A further transfer of consciousness into a mechanical body allowed him to sidestep the ancient laws prohibiting him from entering Hell, allowing him to recover the Slayer's sarcophagus.