Sapidus is a single-level PWAD for Doom. It was released in 1994 by Eddie Nguyen, and is the fourth in a series of single-level wads, following UCA, Talpoida, and Diopatra. Unlike the other levels, it had two releases: SAPIDUS.WAD on June 5, 1994; and SAPIDUSB.WAD on June 9, 1994, the only version available on the idgames archive. The second release fixes an error with the slime pits in the level (see Bugs). 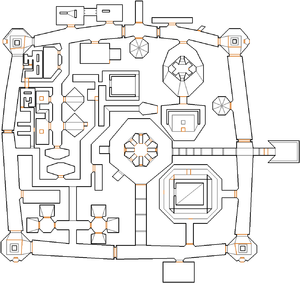 Map of Sapidus
Letters in italics refer to marked spots on the map. Sector, thing, and linedef numbers in boldface are secrets which count toward the end-of-level tally.

In the original release, SAPIDUS.WAD, the slime pits in each corner of the level (sector 15) use sector effect 11, a 20% damaging floor that hurts you through the radiation suit, but also ends the level when your health drops below 11%, enabling an unintentionally quick exit. The second release, SAPIDUSB.WAD, changes this to sector effect 16, a 20% damage floor with a small chance of hurting you through a radiation suit, to fix the error.