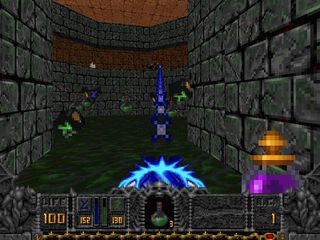 The Sapphire Wand is a weapon from Hexen, the starting weapon of the Mage. It is a long metallic staff adorned with a large sapphire. The staff fires fast moving magical blue darts, capable of piercing multiple enemies on a line pattern, and as with other starting weapons requires no mana. Although it does very little damage, its ability to attack monsters at a distance is its advantage over the other basic weapons due to the Mage's relative physical weakness. It resembles the Elven Wand from Heretic, although it doesn't require ammo.

Because the wand fires a "ripper" projectile, it cannot be reflected or deflected away. This, combined with its infinite ammo, means it can be used against "deflector" enemies such as the Centaurs and the Heresiarch without fear of being hit by a reflected projectile.