Saturnine Chapel, also known as MNENMA 0 is a single-level PWAD for Doom II that requires a Boom-compatible source port to play. It was designed by Darryl Steffen (dobu gabu maru) and uses the music track "Egypt," by Zachary Stephens (Ribbiks). It received one of the 2017 Cacowards.

The first version of Saturnine Chapel was released on 3 January, 2017. On 14 January, it was uploaded to the /idgames archive. 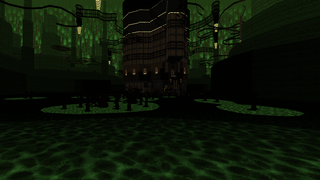 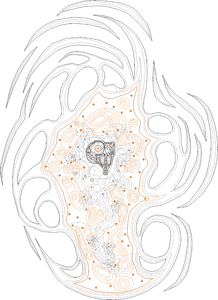 Map of Saturnine Chapel
Letters in italics refer to marked spots on the map. Sector, thing, and linedef numbers in boldface are secrets which count toward the end-of-level tally.

* The vertex count without the effect of node building is 25116. 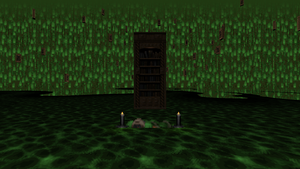 Upon beating the level, the player is taken to a second map which serves as an ending cutscene. This map has no music and takes place in an empty, otherworldly plane dominated by the same green liquid surrounding the chapel. Bookcases slowly descend from above in the distance while a singular bookcase in front of player slowly melts away. There is no exit, so it is safe to close the game at this point.