Scythe is a 32-level megawad released by Erik Alm in April of 2003. The most distinguishing feature of Scythe is that most of its levels are smaller than average. Also, it was created in a matter of a few months, 31 levels by Alm, and Map 31 by Kim Bach (Torn). It is the most recent addition to the PWADs that Compet-n allows recording on. It was added to Doomworld's Top 100 WADs of All Time listing for the year 2003. 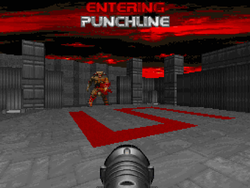 This WAD features three built-in demos. All require Doom II v1.9 to view them. The demo levels are:

The Compet-n episode records for Scythe are: