Scythe 2 is a 32-level megawad for Doom II created by Erik Alm and first released in June 2005. It was missing three levels that Alm eventually created for the re-release in 2009. The megawad is split into six episodes; upon finishing one, the player loses all his weapons and ammo and is forced to start the next episode with just a pistol. Each episode has a different setting and visual style.

The first Scythe was very popular, so this was a highly-anticipated sequel. It too was well-received, winning a Cacoward. While the original featured small, action-packed levels, Scythe 2 is filled with large, complex and detailed maps. This change has proven to be highly influential. In 2019, an article on the history of Doom mapping called Scythe 2 "the second most influential PWAD of all time after Alien Vendetta".[1] 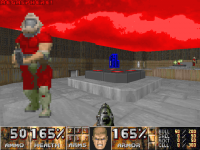 An Evil Marine prepares to attack the player in MAP31: Secret.
The Evil Marine is an extremely fast enemy that replaces the SS Nazi. An evil clone of the original Doomguy, he mimics his opposite's rapid speed. His movement method, which is to zigzag towards his target and pause occasionally for a split second to fire plasma, which is also fast, can make him a dangerous enemy to combat.

The Evil Marine is used sparingly throughout Scythe 2, but is the featured monster in both MAP16 and MAP31. They are much more numerous in cooperative play, where they appear as early as MAP03. 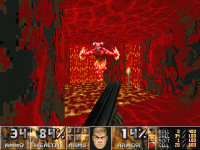 The Afrit makes its first appearance in MAP26: Death.
The DeHackEd patch replaces Commander Keen with the Afrit (or super baron), a powerful enemy monster, both in health and power. The sprite, made by Espi for the ZDoom community Monster Resource WAD, bears a resemblance to the baron of Hell and Hell knight. Its main attack is to fire a flurry of mancubus fireballs and revenant rockets (both unguided and homing) at its target. The Afrit also boasts a high health count at 2500, nearly matching that of the spider mastermind.

The Afrit appears very rarely. In single player, most maps contain very few of them, and they can only be found in the final five maps. There are numerous Afrits in the final level, however. They can be seen earlier in a cooperative game, but are nowhere near as common as the Evil Marine.

The inclusion of the Afrit in Scythe 2 has also brought with it a bug. Because it uses frames from the spawn shooter, any map that includes the shooter along with the DeHackEd patch will crash. This may have been a possible reason for the creation of MAP28 in the incomplete version of Scythe 2 as a metal cube, which, while bringing the megawad to a sudden halt, prevents the player from reaching MAP30 only to have the game crash.

The DSDA episode records for Scythe 2 are: