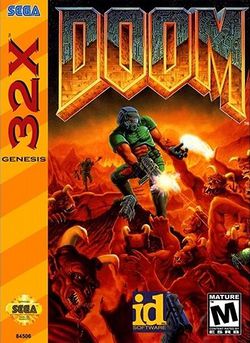 Box art for the U.S. 32X version of Doom

The Sega 32X version of Doom was developed directly by John Carmack and was published as a launch title for the Sega Genesis add-on peripheral by Sega in November 1994.

The game features seventeen maps from the PC version's first two episodes. It disappointed many fans since it does not play in full screen, is missing many maps and several monsters, only displays front-facing rotations for sprites, is missing many sound effects, has no save feature, and has extremely poor music. Much of this is blamed on a rush to get the game out in time for the 32X launch date, while other aspects are simply due to the fundamental limitations of the console.

It is based on and builds from the same source code as the Atari Jaguar version, using a conditional MARS define to distinguish between the two platforms. "MARS" was the development codename for the 32X system.

Only front rotation frames are provided for sprites such as monsters and rockets. Because of this, there is no monster infighting in this version. Likewise, as in the Jaguar and Super Nintendo versions, circlestrafing is not possible due to the use of a "strafe on" key which overrides the ability to simultaneously turn, rather than separate left and right strafe keys.

As with the Jaguar version, the maps have been edited significantly to cut down the amount of geometry and texture usage, and the game does not feature the cyberdemon, spiderdemon or spectre. Due to a complete lack of levels from the third episode, it also lacks the BFG9000 during normal play. However, it is still documented in the game's manual, and the number "7" still exists on the status bar. A cheat code can give the weapon to the player, showing that it was coded in even though it does not appear in any of the maps. This version also has no multiplayer mode.

There is no way to save games, although there is a level select option that allows the player to start on any of the first fifteen maps.

Due to poor use of the YM2612 FM synthesis chip in the Genesis, this version's soundtrack is noticeably inferior to that of other versions, particularly the contemporary Super Nintendo and 3DO ports.

If the player cheats while playing or uses the level select option, they will not see the real ending to the game and will instead be presented with a DOS prompt (C:\DOOM>) after completing MAP15. The game manual incorrectly states that the game will then warp the player back to MAP01 to try again without cheats; however, this does not happen. 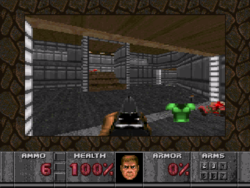 A screenshot from the 32X version of Doom.

The Sega 32X version of the Doom IWAD uses the same wall texture format as the Atari Jaguar port: the "patches" are in a headerless, row-major, raw format, with the first 320 pixels repeated at the end. The TEXTURE1 lump contains dimension information for each texture, which are otherwise ambiguous (for example, both DOORBLU and CRATINY are 1344 bytes in size, but one is 8x128 pixels, while the other is 64x16 pixels).

The palette is stored in a lump named PLAYPALS instead of PLAYPAL. It contains a total of 15 palettes, instead of 14. The first 14 are unmodified, the last one is a palette with a blue tint. The COLORMAP lump contains 64 light levels, instead of 32+2.

Audio data and UI graphics (font characters, status bar, title screen pictures, and so on) are not found in the IWAD, but are instead stored within the cartridge ROM in proprietary Genesis hardware formats.

The map list consists of the first two episodes of Doom, minus the Tower of Babel (the cyberdemon, like the spiderdemon, is not included in the game). Most of the levels have been retextured and simplified to require less resources; many of the Deimos levels have even undergone severe cuts compared to the PC originals. Curiously, the final and secret levels are numbered 23 and 24, leaving a seven-level gap in the enumeration, which might have been originally intended for the seven levels of Inferno that do not contain monsters absent from this port (E3M1 to E3M7, leaving E3M8 and E3M9 out, like the Jaguar version of the game).