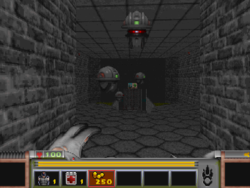 The player in heated combat with four sentinels on MAP31: Training Facility

Sentinels are enemies from Strife. They are round, flying robots which shoot lasers at the player. Sentinels have 100 hit points, and are considered one of the easier enemies in the game. Like all robotic enemies, sentinels ignore alarms.

In the IWAD the sentinel is first encountered on these maps per skill level:

The IWAD contains the following numbers of sentinels per skill level: