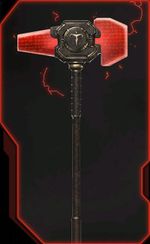 The Sentinel Hammer as it appears in the Codex.

The Sentinel Hammer, also called the Hellbreaker, is a weapon which appears in The Ancient Gods, Part Two, the second single-player expansion for Doom Eternal. It belonged to the Betrayer, who presents it to the Doom Slayer during their journey to the World Spear as a sign of gratitude for putting his son's soul to rest.

When used, the Slayer leaps up and slams the hammer into the ground to produce a shockwave around him, stunning demons that survive the attack and causing them to drop bonus resources if they have been frozen with an ice bomb or set on fire using the flame belch. The hammer will also instantly destroy stone imps, increase the length of time that marauders and the Dark Lord remain stunned, and increase the time required for an armored baron to regenerate its armor. The hammer also destroys the energy shields used by shield soldiers and Doom hunters, but cannot affect the shields used by riot soldiers or the arch-vile.

The hammer must be charged by performing glory kills, destroying weak points or collecting hammer charges found throughout each level (similar to the Crucible charges found in Doom Eternal); each glory kill or destroyed weak point generates half a charge. During the battle with the Dark Lord, each summoned wolf will drop half a hammer charge when it is destroyed.

Upgrades for the hammer can be obtained by completing the first wave of each Escalation Encounter. 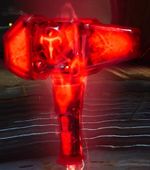 The Sentinel Hammer becomes available in Horde Mode after reaching stage five of Reclaimed Earth. In Horde Mode, four glory kills/destroyed weak points are required to charge the hammer instead of two; hammer charges found in each arena will still fully charge the hammer as normal.