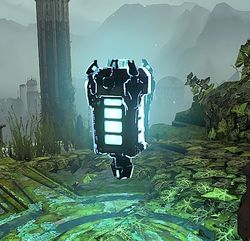 A sentinel battery in Exultia.

Sentinel batteries are items used to power Night Sentinel machinery. They are used to unlock bonus items in the Fortress of Doom.

The first battery is found in Exultia and is mandatory for game progress; after completing this level the battery must be plugged into a console near the center of the fortress, powering it up and allowing the rest of the fortress to be explored. There are a number of locked doors in the fortress that each require two batteries to unlock them - by acquiring batteries from later levels the player can acquire two Sentinel crystals, two modbots, four Praetor suit points and three Slayer skins. (Because the "All Runes" cheat code is hidden under the room containing the original Praetor suit, spending batteries is an indirect requirement to obtain this item as well.)

Using eight batteries in a single save slot is required to complete the "Homemaykr" achievement and tick off its corresponding milestone.

Sentinel batteries are filled with the untainted essence bestowed upon them by the Elemental Wraiths before their imprisonment by the Hell priests for the purpose of creating Argent energy. While the Sentinel energy is separate from Argent, it seems to be a mighty source of power on its own, being able to power the Fortress of Doom, along with other huge machines, and grant the Sentinels their enhanced strength. Ever since the Wraiths were imprisoned and slain, Sentinel energy has been scarce, only found in the Sentinel batteries scattered throughout Hell, Mars, and Earth.

In addition, one battery is awarded for completing all three challenges in a level.