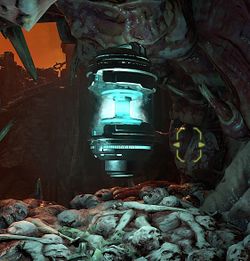 Sentinel energy, also known as Wraithfire, is a type of fuel used to power Night Sentinel technology, harvested from the Elemental Wraiths before their destruction by the Hell priests.

On Argent D'Nur, after the Argenta were able to defeat the Ancestrals and attain dominance over the world, they put resources toward researching the Elemental Wraiths. This led to an understanding of magick and the formation of the Order of the Deag. Sentinel energy is apparently similar to Argent, both able to power huge machines, manifest weapons such as the Crucible blade, and offer medical benefits, healing disease and giving the Sentinels a boost of strength. Sentinel energy is found in-game in the form of Sentinel batteries which are used to unlock parts of the Fortress of Doom, as well as Sentinel cores which are used to power Sentinel technology, such as parts of Atlan mechs, to advance through parts of levels.

Once the Maykrs discovered Argent D'Nur and the potential power of Argent energy, they worked with the Hell priests to create the Nekravol using Argenta slaves. There, Sentinel energy is combined with Hell essence to create Argent for both the Maykrs and the Night Sentinels, who were initially unaware of its true source. Their discovery of this betrayal, whereby the souls of their own fallen came to fuel their civilization, led to the Argenta civil war.