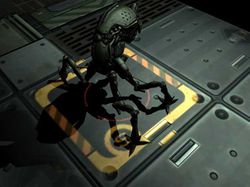 A sentry bot.
"Marine, if you run across any operational sentry bots, use them. Those guys pack a lot of firepower."
― Sergeant Kelly [source]

The sentry bot is a small, dog-sized security robot with a prominent head and four highly articulated spider-like legs. It is employed in all sectors of Mars City in Doom 3. Each sentry bot is equipped with a powerful machine gun and a flashlight. They were constructed by Mixom Corporation for the UAC. Though utilizing sophisticated artificial intelligence, records of several adverse incidents with the bots can be found in several employees' PDAs, detailing accidental discharge of their weapons, or unexplained rejection of new employees' identification credentials.

At the beginning of the game they can be seen in the Marine HQ. One sentry bot will lead the player to the Mars City Underground elevator. When the demons invade the base, many sentry bots are destroyed. If you find one still active, it will help you fight the demons. Sentry bots make excellent allies; their standing is on par with the more elite demons such as the revenant and chaingun commando, and they can easily mow through hordes of Z-Sec soldiers and imps. In the Resurrection of Evil expansion, however, they are sometimes overwhelmed and destroyed by large groups of revenants and require the player's backup in order to survive.

Sentry bots can be found in Mars City, the Enpro Plant, and Communications Tower. In Resurrection of Evil they can be found in Erebus Monorail Station and the Phobos Complex. The sentry bot also returns in The Lost Mission, appearing in Underground (Part 2). This level represents perhaps the stiffest challenge for the bot, where it must survive a long trek through dark, enemy infested corridors, facing down multiple revenants, chaingun commandos, imps, and, at the end of the level, a gigantic battle including multiple Hell knights and cacodemons. In a manner unique to this level, however, an infinite number of bots can be dispatched from the storage rack near the beginning of the level - if one dies, simply return there and release another to take its place.

Curiously, if the player has the Soul Cube, destroying a sentry bot with the player's own attacks counts as a "kill" to charge up the cube. This can be seen when playing The Lost Mission on Nightmare difficulty.