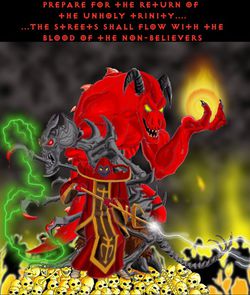 Front to back: D'Sparil, Korax and Eidolon in a fanart.

The Serpent Riders are a trio of sibling demons, bent on domination of the known universe. They are the central, but separate main enemies of Heretic, Hexen and Hexen II. The symbol of the three appears similar to a Neptune trident, although it is featured prominently only in Heretic. According to the Chronicle of Deeds (a fictitious work written by Themedes of Mur from Septimus on the world of Thyrion), as detailed in the manual for Hexen II, the Serpent Riders were able to enter the mortal universe from the chaos outside when the captain of a star-faring magical vessel accidentally pierced a crystal dome at the edge of reality with the bow of his ship. Though the celestial sailor sacrificed himself in order to seal this breach, three of the innumerable demons on the other side—the Serpent Riders—were able to make it through before he could complete his work. They then went about sowing seeds of chaos throughout many different dimensions.

The three Serpent Riders are as follows: