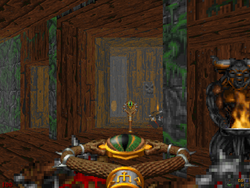 The Serpent Staff, as seen in the player's hand and in a level.

The Serpent Staff is a weapon from Hexen, the second of four weapons available to the Cleric. It resembles a short, snakeskin-bound staff with a large reptilian eye set into the headpiece. The eye blinks every so often when the weapon is not being fired, and closes when the weapon is put away. The weapon fires twin magical venom balls at a decent rate, and requires blue mana to function, at a rate of one unit per attack. The projectiles move in a horizontal wavy pattern, gradually spreading away from each other. A player struck by the serpent staff's venom balls will receive only half of their damage at once, but also will be poisoned, producing a green tint on the screen and damage over time. Monsters, however, receive all the damage at once with no poison effect. Overall, this weapon is much more effective against monsters as they receive 5-40 damage from each projectile while players only 6-24 damage (including 4 points of damage over time).

At a close range (96), the serpent staff automatically performs an alternate melee attack that can suck the life from its target to heal the player to the amount of 1/8 of the damage dealt, rounded down. This is particularly useful for a skilled cleric as he can heal himself from the many ettins encountered in the game. Attempting this against centaurs or slaughtaurs is dangerous, however, as their shield can reflect poison back at the cleric even at melee range. The lifesteal is not reduced in case of overkill damage but is not applied when hitting invulnerable targets.

The neck of the weapon has the trident of Neptune on it, the symbol of the Serpent Riders.

The staff is first encountered in the Seven Portals hub.

In the IWADs the Serpent staff is first encountered on these maps per skill level:

The IWADs contain the following numbers of Serpent staffs per skill level: