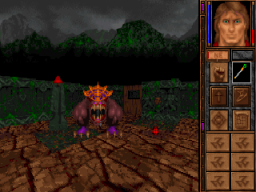 Shadowcaster level 1
Shadowcaster is a first-person shooter/role-playing computer game developed by Raven Software and released in 1993. The game is notable for its use of a hybrid game engine called the Raven engine, which was created by John Carmack as a successor of the Wolfenstein 3-D technology and a predecessor of the Doom engine.[1]

Two versions of the game exist: the original game was released on eight floppy discs, and an enhanced version on CD-ROM was published on the following year, featuring two additional levels with a few new enemies, remade intro and endgame movies, and cutscenes with voice-acting inserted throughout the game to replace text-box exposition.

The player takes the role of Kirt, a human with powers of shapeshifting. Among other forms, Kirt can become a huge cat-like animal, a floating tentacle-wielding gazer, and a dragon.

The Shadowcaster game engine was written by id Software's John Carmack and licensed to Raven Software.[2] Carmack wrote the Shadowcaster 3D engine during his technology research after id completed Wolfenstein 3D.[2][3] The engine features diminished lighting, texture mapped floors and ceilings, walls with variable heights and sloped floors.[2] The engine was "about half as fast as that of Wolfenstein"[2] but fit the exploration of Shadowcaster rather than the fast paced action of Doom.

The Shadowcaster engine received from Raven Software additional features such as inventory management, a hub system, and scripted levels. Hexen would benefit from similar features, though Shadowcaster's scripting system is unlikely to be too similar to ACS; and a simpler inventory management system had found its way into Heretic earlier.

After Shadowcaster was completed, Raven Software split its staff in two development teams. One using the Doom 1.2 engine to create "Mage", a fantasy shooter that would become Heretic; and another that was to build upon the Shadowcaster engine to create a sci-fi shooter that would become CyClones. However, the engine could not easily be made to support the new features they wanted to use, such as moving 3D floors, and Raven ended up developing a new engine from scratch, which they called the STEAM engine. Traces of the Shadowcaster technology remain however in the format used to store game data, so a tool (for instance SLADE3) able to view and extract resources from Shadowcaster's archives can do likewise with CyClones' own.