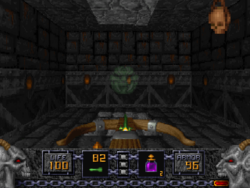 Shadowsphere found in E1M3: The Gatehouse.

The Shadowsphere is an artifact in Heretic. It looks like an ethereal green sphere with a face. Activating the Shadowsphere gives the player the Heretic ghost attribute for 60 seconds, becoming translucent and gaining immunity to non-magical attacks (such as the Firemace's attacks). It also decreases the likelihood of idle monsters noticing the player, and causes their aim to become erratic.

In the IWADs the shadowsphere is first encountered on these maps per skill level:

The IWADs contain the following numbers of shadowspheres per skill level:

Due to a bug involving an out-of-bounds array read, firemace spawn spots on the unnamed E4M1 in the first v1.0 release of the registered Heretic will spawn shadowspheres at any spot where a firemace did not randomly spawn. This is caused by reading the first entry of one of the game's internal ambient sound sequences, which happens to have the value "5", as if though it were an mobjtype_t enumeration value. All other episodes spawn deliberately chosen enemies, not power-up items, when executing this routine. This behavior was removed from later versions of the game.