Shadowy Forest is a single-level PWAD for Heretic, designed by Ken Phipps and released in February 2000. The map is themed around a forested area, with emphasis in outdoors, village-like buildings and mountain forts. It employs new textures, graphics and ambient sounds.

Shadowy Forest is a very expansive and diverse map. It combines multitude of themed visuals in cohesive progression and follows the player into a variety of areas. The gameplay ensures heavy fighting, and there is also a number of hidden puzzles. 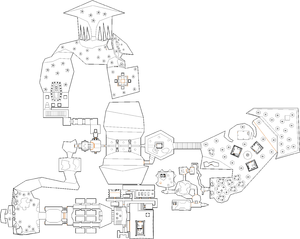 Map of Shadowy Forest
Letters in italics refer to marked spots on the map. Sector, thing, and linedef numbers in boldface are secrets which count toward the end-of-level tally.

* The vertex count without the effect of node building is 4648.