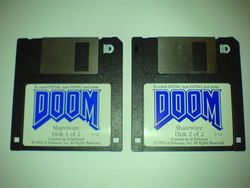 Shareware is a software marketing concept where an incomplete or time-limited version of a program is released free of charge or for a nominal distribution fee, with encouragement to further distribute, in order to entice people into buying the full (registered) version. Doom and Heretic were both initially released as shareware, each containing only the first respective nine-level episode in the unregistered version: Doom: Knee-Deep in the Dead and Heretic: City of the Damned.

Part of the reason Doom II was not given a shareware release, according to John Carmack, was that "[a] lot of people consider themselves to have 'finished DOOM' when they just finished the shareware episode."[1]

In the same vein, both Hexen and Strife received only small three- to four-level demo releases rather than full-blown shareware versions, demonstrating that the concept had more or less completely fallen out of favor with the game industry by 1995.