Sharp Things is a single-level PWAD for Ultimate Doom that was designed by Xaser Acheron in 2013 and last updated in 2017. It uses the music track "Faces of the Wind" by Lexus Alyus. The par time defined in the DEHACKED lump is 5:00 (but see Bugs). 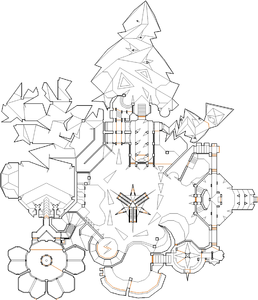 Map of Sharp Things
Letters in italics refer to marked spots on the map. Sector numbers in boldface are secrets which count toward the end-of-level tally.

The par time in the DEHACKED lump is malformed in Doom II syntax, so it is not actually used on the intermission screen.

* The vertex count without the effect of node building is 2518.