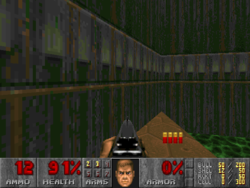 4 shotgun shells rest in a corner of the zigzag room in Doom, E1M1: Hangar.