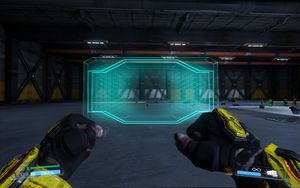 The shield wall in use. 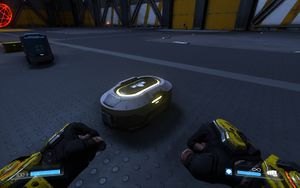 A shield wall pick-up in SnapMap. 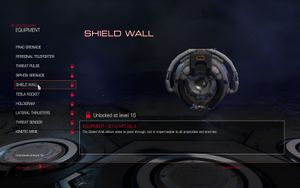 The shield wall as it appears in multiplayer.

The shield wall is an equipment item in Doom (2016) which is available in multiplayer and in SnapMap. When used, it creates a temporary barrier at a short distance in front of the player which is solid to all projectiles (including bullets and buckshot from rifles and shotguns) and to enemy players, but is passable to the user and to other players on the user's team.

Like other side-arm equipment items, the shield wall has unlimited uses, depending only on its recharge timer to provide balance. The wall created by the item lasts for ten seconds. As the wall is about to dissipate, it will turn from blue to red and begin to flicker.

In multiplayer, the shield wall must be unlocked through progression and then specified in the loadout settings before a match. Since v6.66, the shield wall is unlocked for use at level 16. Enemy team shield walls appear red rather than blue.

In SnapMap it is both possible to place a shield wall in the map for players to find and collect, and to specify it in a player loadout object and apply that object to players either at map start or in response to an event.