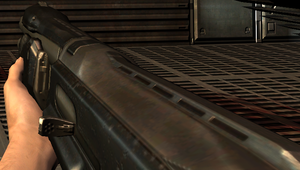 The shotgun.
This article is about the weapon in Doom 3. For other versions of this weapon, see:

The shotgun of Doom 3 is a devastating close-range weapon. It can be first found in Mars City Underground on either a shelf or in the large room with multiple generators.

"The weapon of choice for close combat. Use sparingly for medium or long-range targets."
― Doom 3 instruction manual

The Doom 3 shotgun is pump-action, and holds 8 shells at any one time. It is also the only weapon in the Doom 3 arsenal which allows for firing during reloading. Ammunition for the shotgun is in the form of small packets or large boxes of shells, as well as deceased shotgun zombies. Ammo is generally easy to find throughout the entire game, and since most of the levels take place in close quarters, Shotgun usually serves as the main weapon of choice until the harder levels. The shotgun also has a "double" shell reload action where two shells are loaded, even though the animation shows the marine only putting in one.

Due to its extremely wide spread, it is almost useless at long range, making it only useful for close encounters. It's twice as powerful as the original shotgun (in effect doubling its function as a replacement for the classic double barrelled shotgun).

The shotgun works best against imps, zombies, demons, Z-Secs and cacodemons. Remember to get very close to your target before firing. Otherwise, a few pellets might miss. If an enemy has a melee attack, trick it into using the melee attack, then shoot.

The shotgun is useful until the start of Delta Labs, where powerful enemies such as commandos and arch-viles start to appear. At this point, it is best to rely on it as a secondary weapon; using it against such stronger enemies is strongly not recommended as it puts the player at a grave risk of being counterattacked easily. However once you soften them enough from a distance, you can unleash the shotgun to finally take them down at close range.

If all of the pellets did not connect and the target is still alive, grab either the pistol or machine gun and finish it off.

The shotgun does not feature a rear sight like the original, but rather only a very bulky front sight, not unlike 'bead sights' found on many civilian hunting shotguns.

Despite presumably being a military grade combat shotgun, the shotgun features a hunting shotgun-style ventilated rail instead of a vented barrel shroud. Said vented rail is also mysteriously on the shotgun's receiver, which would render it useless.

Values shown in "normal damage" and "headshot damage" entries are calculated per pellet. One shell fires 13 pellets.
The "reload" entry shows the reload rate to be two shells at a time, at variable speeds around 1 second.