Shrine of the Warriors

Shrine of the Warriors is a single-level PWAD for Doom II. It was designed by Daniel Norman (Stormin) in 1994. 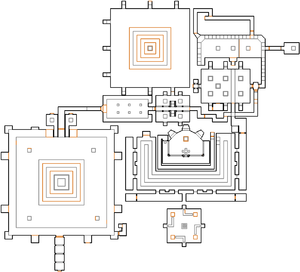 Map of Shrine of the Warriors
Letters in italics refer to marked spots on the map. Sector, thing, and linedef numbers in boldface are secrets which count toward the end-of-level tally.

This WAD features three built-in demos, with the third one completing the level. All require Doom II v1.666 to view them. The demos are: