Sin City 3 is a single-level PWAD for Doom II and the ZDoom source port that was released on July 29, 2008 by Edward Cripps (Ed). It uses the music track "The Lost" by Pregnant With Worms. It is the third and final entry in the mapper's Sin City series, following 2001's Sin City and 2003's Sin City 2: The Satan Complex. 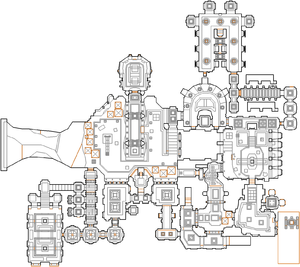 Map of Sin City 3
Letters in italics refer to marked spots on the map. Sector, thing, and linedef numbers in boldface are secrets which count toward the end-of-level tally.

The (absence of) data was last verified in its entirety on August 8, 2022.

* The vertex count without the effect of node building is 7809.