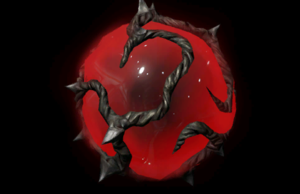 The siphon grenade is an item and weapon in Doom (2016) which can only be used by the Doom marine, as it depends upon the unique abilities of the Praetor suit to absorb and utilize Argent energy. It functions on the basis of alternately charged Argent energy fields, creating a positive charge on the user's suit and exploding with a negatively charged field. The resulting differential creates an attractive Argent field that pulls plasma from any demons caught in the blast radius, feeding it back to the marine as energy which can heal him.

The siphon grenade is particularly powerful in concert with the Equipment Power and Rich Get Richer runes, as with the former, the siphon grenade becomes capable of restoring armor as well as health. With the latter, the player will have infinite ammunition if their armor level is high enough, so the siphon grenade then becomes a chief means of refilling the player's armor points and regaining this status.