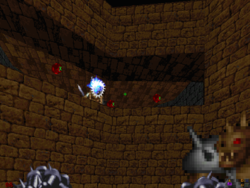 A Slaughtaur on a ledge in Hub 3: Heresiarch's Seminary

The slaughtaur is an enemy in Hexen. It is a more advanced version of the centaur, exhibiting the same appearance and behaviors but with the addition of a ranged attack: magical blue fireballs launched from the skull on its shield. In addition, the slaughtaur has 250 hit points, versus the 200 hit points of a regular centaur. The species is described as follows:

"These Centaur leaders are much like their minions, but they're considerably tougher and they can spew magical fire from their shields. So we won't say anything about their apt name. Your safest strategy is to attack them from afar as they tend to do the same."
― Hexen instruction manual

When attacking at range, the slaughtaur always launches two blasts in quick succession, so long as it is not interrupted by its pain state. Note that when a slaughtaur is holding up its shield to fire, it is vulnerable to attack, even though its pose is the same as if it was in a defensive state - this can confuse players into thinking they are defending. Slaughtaurs behave similarly to centaurs in all other respects, and may be approached with similar tactics, save that their powerful ranged attack makes approaching to melee distance a dangerous proposition. Like centaurs, slaughtaurs receive increased damage from the Arc of Death, although the lightning cannot pierce their shields.

Slaughtaurs are immune to each other's fireballs, but regular centaurs can be injured by them. In a manner similar to the Hell knight and baron of Hell in Doom II, however, centaurs and slaughtaurs will never infight.

In the IWADs the slaughtaur is first encountered on these maps per skill level:

The IWADs contain the following numbers of slaughtaurs per skill level: