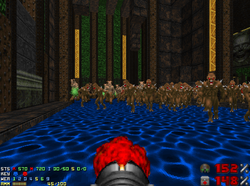 A slaughter map is a style of fan-made Doom level in which gameplay is focused on fighting hordes of monsters, comprised mostly of imps, demons, cacodemons, revenants, or Hell knights. These fights often occur in large arenas, allowing for swarms of dozens or even hundreds of monsters. Some of these fights also involve boss monsters, such as cyberdemons, or multiple arch-viles. For vanilla survival, the player must apply crowd control tactics, such as inducing infighting, while using the strongest weapons, primarily the rocket launcher and BFG9000.

According to Anders Johnsen, the term "slaughter map" was used "loosely" during the early years of the Doom scene in the 1990s.[1] This set a precedent for what has become something of a running joke in the community: the labeling of any map deemed too hard as "slaughter".[2] Still, among highly skilled players there is a rough consensus of what constitutes a slaughter map.[3]

Some consider SQUARES, released in March 1995, to be the first slaughter map.[4] Others consider the Punisher map made by Dario Casali in August 1995 and The Plutonia Experiment's MAP32 made by his brother Milo several months later the first two.[5] 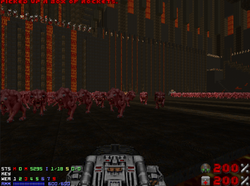 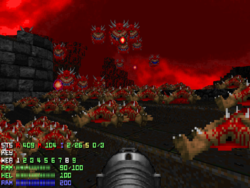 Fighting swarms of monsters in the final map of Scythe 2