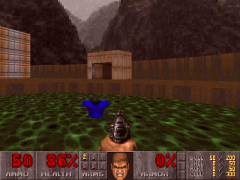 A nukage pool in Doom E1M1

Damaging floors are floors (sectors or groups of sectors) that damage the player while the player stands on them. They form part of the "dangerous Doom environment" described in the game booklets:

Slime and other radioactive waste: Many of the areas in Doom contain pools of dangerous liquids that will damage you if you walk through them. There are several varieties of waste, each doing increasing damage. If it looks fluid, beware!

Because the damaging effects are determined independently from the flats used on their area, they may be used to stand for different types of hazards and substances, according to the graphics chosen for the floor, such as green slime or lava, and any associated hints. Flaming wall textures may reinforce the idea of a very hot area, radioactive warning signs that "nukage" has leaked, and a level name like Toxin Refinery that hazardous organic substances abound.

Despite the damaging effects, it is often necessary to cross a damaging floor during play. Crossing as quickly as possible minimizes the damage. If the player has armor, then damage is split between health and armor as normal. Also, the radiation shielding suit protects the player from damaging floors for a limited time.

Damage is applied periodically, on every 32nd gametic (approximately 0.91 seconds). The check is performed against the global level time; thus it is equally possible to receive damage immediately upon touching the sector's floor, or to cross whole sectors completely unscathed. Because of their strict periodicity, the damaging effects can be avoided by continuous jumping in those engines that employ it (such as Hexen or some source ports).

Damaging floors do not affect monsters.

The fluid appearance is implemented using animated flats, which include nukage, lava, blood, and the like. Flats are also defined to implement blue water and sludge water, but these are not usually damaging.

In Doom and Heretic, the appearance of the flat does not control whether the floor is damaging. The level designer assigns a special type value to make the floor of a sector damaging when the player is within the typed sector. Thus, there can be (and are) damaging floors that do not have the usual fluid appearance, and sometimes a floor expected to be damaging because of its texture is not damaging. For instance, in E2M2: Containment Area and E2M7: Spawning Vats, there is a rare example of a non-animated damaging floor, using a row of intense blue lights in a trench.

In Hexen, some flats are hard-coded to do damage instead of also needing a sector type (allowing the sector to have another unrelated sector type).

The following damaging floor types are found in Doom:

(Damage is halved, rounded down, at skill level 1.)

A specialized damaging floor type (11) is occasionally used in the last room of a level (e.g. MAP11: Hunted). Damage is inflicted as with type 5, but when the player's health drops below 11%, the level ends. The player's health cannot drop below 1% while within this type of sector, a fact that has strange consequences when the player is not touching the sector floor – so long as the player's mid-point remains in such a sector, he becomes essentially invulnerable after his health is reduced to 1%, but will not exit because that check is only made if he is on the floor.

For the 20% damage types (4 and 16), there is a small chance (6/256 ≈ 2.3%) that the player will be damaged during a given check, even with a radiation suit. Considering the possible events independently, and averaging over time (0 through 31 tics remaining until the first check), probability theory gives the cumulative effect over the full duration of a radsuit (60 seconds) as:

Due to the periodicity of Doom's pseudorandom number generator, however, the player instead takes damage as follows:

The latter result presumably should not be accepted at face value, because it assumes that numbers are read from m_random.c consecutively; in a real level, other phenomena (such as roaming monsters and blinking lights) would frequently call the generator as well. Moreover, in stock maps, it is rarely necessary to remain on the same damaging floor for 60 seconds. Testing seems to fit the independent model better, i.e. the probability is similar for one hit and for two hits, but above that, it drops sharply.

The damaging floor effect is perfectly synchronous with the weapon bobbing logic, because both of these employ global leveltime checks for timing. Specifically, the damage is applied at moments when the weapon is in either top point of its cycling motion. [1] It is unclear whether this was intentional or not.

In the press release beta version of Doom, being inside a damaging sector caused the player to make a sustained ouch face on the status bar. In an interesting and likely coincidental reversion, the Sony PlayStation version of Doom has the player grimace in this same situation, but using the face picture usually employed for direct frontal damage or prolonged weapons fire.