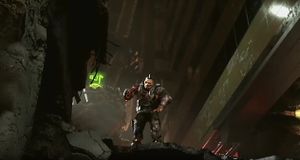 A zombieman takes aim at the player.
This article is about the monster in Doom Eternal. For other games, see:

The soldier (blaster) is a monster in Doom Eternal, taking the place of the possessed soldier from Doom (2016). It reprises its role as an armed former human for the first time in a main-series Doom game since Doom 64, with a design heavily inspired by its appearance in that game (which was in turn directly based on the original). Like the possessed soldier before it, the soldier now attacks with a plasma-powered, projectile-based weapon which can either be fired off in single shots or charged up for a slower but more powerful blast. A version with a shield also exists, like the possessed security, named soldier (shield). Like all monsters in the game, the soldier is highly mobile - he even has a jet booster which allows him to make high jumps.

The soldier seems to retain even more intelligence than its forebears and speaks with others of its kind in a low-pitched demonic voice - this is similar to the radio chatter used by the likewise intelligent Z-Secs of Doom 3.

The soldier is faster and more aggressive than the basic zombie, and can deal fairly high damage with its charged shots. However, it is not much more durable than a zombie, with 400 HP (150 staggered) and can be staggered with a single point-blank shotgun blast. 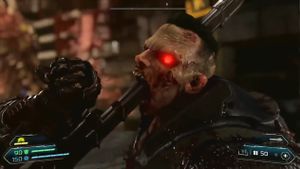 The Doom Slayer executes a soldier using the Doom blade.

As the name suggests, soldiers were originally human troops, possessed by the power of Hell and forced to turn on their former allies.

In noclip's Designing DOOM Eternal's New & Classic Demons video, the soldier is referred to as the 'hellified soldier', a name referenced by Hugo Martin.