Songs of the Damned

Songs of the Damned is a single-level PWAD for Doom II released in 2006. It was designed by Trevor Primmett (iori) for Boom-compatible source ports and uses the music track "".

Songs of the Damned was awarded one of the 2007 Cacowards, and was featured in Doomworld's Top 100 Most Memorable Maps, placing 85th. 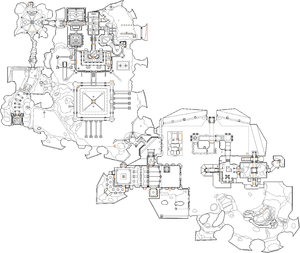 Map of Songs of the Damned
Letters in italics refer to marked spots on the map. Sector, thing, and linedef numbers in boldface are secrets which count toward the end-of-level tally.

This WAD features a single built-in demo, DEMO1, by the author. It requires Doom II with a Boom-compatible v2.02 source port to be viewed and runs for 14:46.94 (31043 tics), showing off the level on Ultra-Violence.

* The vertex count without the effect of node building is 13725.