Soul Cube at the ready.

The Soul Cube is an ancient Martian artifact and a powerful weapon in Doom 3. In the default keyboard settings, press the "Q" key to use the Soul Cube. Its name may be derived from the soul sphere item in classic Doom.

"An artifact discovered in the caverns excavation site. Research of the Cube's origin and function are ongoing."
― PDA description 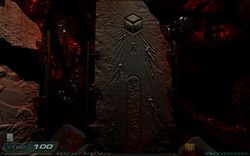 This tablet depicts the formation of the Soul Cube. 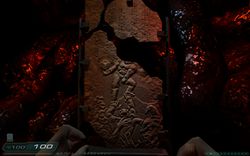 The ancient Martian Hero wields the Soul Cube in battle.

After the Martian race first encountered the forces of Hell at some point in their past, they ended up in a hopeless struggle against its demons. With whatever conventional weapons they had proving ineffective at stemming the horde, they eventually devised a plan using their greatest technology, which bordered on functional magic. Most of the survivors were sacrificed, and their souls were used to create the weapon that would turn the tide: the Soul Cube. With it, their single greatest champion, simply called "the Hero", (a take on the Doomguy's namelessness) took on the invading force single-handedly and managed to seal the portal. "The Hero" apparently did not survive to see the evacuation of his race, since his burial chamber was found. He may have been very tall, as his sarcophagus is very long. The Cube was buried along with other artifacts near the Hero's burial chamber, in case anyone ever had to deal with the forces of Hell again.

Ages later, human archaeologists on Mars discovered the Soul Cube, and through the translation of the Martian tablets, learned of its purpose. Director Larry Bullman was the one who first theorized that the Soul Cube was a weapon.

Shortly before the Mars invasion began, Dr. Betruger took the Soul Cube and went through the teleporter without authorization to have it contained in Hell. Now in possession of the only weapon that could defeat them, the demons invaded the UAC Mars Base.

The Marine receives the Soul Cube at the end of his trek in Hell, just after defeating the Guardian boss. After the Player obtains the Soul Cube, it gives a speech, with the most important words informing the user that they (the souls of the Cube) are "the Praeleanthor" (possibly the name of the Ancient Martian race) and that they are the only way to defeat "Hell's mightiest warrior" (the Cyberdemon).

With the Cube's aid, the Player fights his way through the demonic forces to the Hell Hole where he confronts the Cyberdemon that guards the portal. After a great battle with the Cyberdemon and its minions, the Marine and the Soul Cube triumph. The Soul Cube slices off one of the Cyberdemon's legs, then impales its blades into the demon's head, killing it. After killing the Cyberdemon, it proceeds to travel into the Hell Hole and seals it off, causing lava to boil up to the top and solidify. The Cube's ultimate fate is not clear. It was either destroyed (sacrificing itself) or buried within the Hell Hole in order to destroy Hell's only link to our dimension.

"Destroying evil gives us life, and makes us stronger. Unleash us when you hear our call. We will pass the life force of those we slay to you. We foresee a great battle, but the outcome is not clear. We are the only way to destroy Hell's mightiest warrior."
― The Soul Cube [source]

The Soul Cube is powered with the life force liberated following any death, including humans and allies, at the hands of its current user. Five kills will leave the Cube ready and fully-charged, and it will then say, "Use us." An indication will be when the Cube is lit up at its five orbs (four on the side and one in the center). The Cube then displays a large intersecting collection of whirling circular blades, before zooming off to the target and damaging it with the said blade array. During its attack, the player's normal weapons replace its position at the helm. It also transfers the target's life force to the user, partially or completely healing any injuries the player may have, depending on the remaining hit points of the main target when the Cube strikes. The Soul Cube attacks intelligently; it always attacks the enemy with the largest amount of hit points within range, and homes in on the target. This targeting can be overridden by aiming the screen reticule at a particular target. The damage per Soul Cube attack is 1,000, and splash damage of 40 to adjacent enemies. The maximum health that the Cube can restore to the player is 99. The rate of restoration is 5 health points per interval, and two intervals per second. The Soul Cube will not restore damage taken after the attack begins, but before it is completed. Be aware that it is possible to launch the Soul Cube without a valid target, in which case the charge will be wasted at no effect.

Only the boss demons, like Sabaoth and Cyberdemon, can hope to survive even a single Soul Cube attack (4 attacks to be exact to kill the Cyberdemon), and even then the Cube still performs a life force transfusion. The Cube then retracts the array and returns to the user until its wielder inflicts enough deaths to re-energize it.

It should be noted that the life force absorption seems to be only needed to power the Soul Cube's movement and homing functions. When it is idle, it occasionally displays its blades and spins for a brief period of time.

The Soul Cube does not attack monsters that are unaware of the user's presence.

The Soul Cube should be reserved for larger enemies, like the Hell Knight or Arch-Vile, and bosses like the Vagary and Sabaoth (be sure to have it fully charged.) Since the Soul Cube requires five kills before it becomes operational, it is advisable to use it primarily on stronger enemies. This does not mean that the player should completely reserve using it when swarmed by small enemies like Trites or Cherubs. This is because the splash damage from the cube's attack is likely to dispatch several targets at once, and the availability of many tiny targets ensures that the soul battery is very easy to refill throughout the encounter.

On Nightmare difficulty, with no health kits to find, the Soul Cube becomes the player's primary means to restore health. Be sure to target the stronger opponents while doing so, demons with lower health will not always refill the player's health to 100.

As stated above, when charging the Soul Cube the best enemies to kill are ones with few Hit Points, such as the Trite, Tick, and Lost Souls. It is possible to kill living humans and even destroy sentry bots to fuel up the Soul Cube.

The Soul Cube also appears in other games in the Doom series.

In Doom II RPG, it is a usable weapon found in Hell with much the same behavior as in Doom 3, albeit with a less ornate appearance.

In Doom (2016), the Soul Cube can be found in Dr. Olivia Pierce's office in the Lazarus Labs. Its form here is identical to that from Doom 3, but the cube seems to be inert and no longer levitates. It cannot be collected and will not react to any manipulation by the Doom Slayer. The cube is furthermore depicted in a carving which can be found in Argent D'Nur, where the same scene found on the ancient Martian tablets in Doom 3 is pictured, albeit with some details depicted differently. This seems to indicate that inhabitants of the area who made this carving—be it the citizens of Argent D'Nur before its fall, or the demons of Hell afterward—were aware of the ancient Martian hero's battle. This may even be meant to imply that the ancient Martian hero is in fact the same person as the Doom Slayer, but the game does not give enough information to establish this as fact. Ruins found on the surface of Mars in the Hellas Planitia region where the UAC Mars Base was built may also point to a connection.

In Doom Eternal, the Soul Cube can be found on the Fortress of Doom, evidently having been seized from the Lazarus Labs by the Doom Slayer.