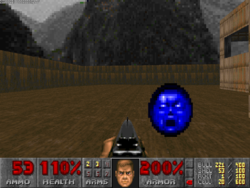 The very first supercharge found in the Doom universe, in a secret area on E1M2: Nuclear Plant. 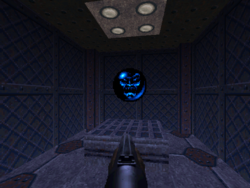 A supercharge next to a corridor found in Doom 64 MAP04: Holding Area.

The supercharge powerup (called soul sphere in the manuals) is a powerup first introduced in E1M2: Nuclear Plant of the Knee-Deep in the Dead episode of Doom. In that game and in Doom II it appears as a floating blue sphere with a glassy appearance and a pulsing humanoid face inside. Doom 64 has a very similar design, except the face is now demonic looking. Picking one up increases the player's health by 100 percent, up to a maximum of 200 percent (or 199 in early versions of Doom), and the player receives the message "supercharge!".

At one point in Doom's development, it was intended for the player to have a limited number of lives. The Doom Bible notes that "the soul sphere contains the life energy of a human soul" (hence the appearance and naming) and that collecting it would award an extra life. That behavior would have made it resemble the 1-up (extra life) powerup from Wolfenstein 3D, which is somewhat similar in appearance.

In the IWADs the supercharge is first encountered on these maps per skill level:

The IWADs contain the following numbers of supercharges per skill level:

The soul sphere (now called megahealth, in the vein of Quake series games) makes an appearance in Doom 3, although in multiplayer only. It sets the player's health points to 200. The megahealth looks extremely similar to the classic supercharge, with a prominent baby face not unlike that of a cherub.

In Doom RPG, the soul sphere gives the player maximum health and maximum armor, similar to the megasphere in Doom II.

Soulspheres appear in several levels of Doom Eternal, usually in hidden locations. Similar to the megasphere from Doom II, they boost the player's health and armor to their current maximum values.