To activate a cheat in most versions, one simply types the code while playing (this also applies while in automap mode). After the last letter has been entered, a message of acknowledgement will appear at the top of the screen. The status bar, face, and ingame view may also change, depending on the effects of the code. All of the codes for the original game work in all ports, unless otherwise noted.

Cheat codes in vanilla Doom are disabled on the "Nightmare!" skill level, except for the iddt and idclev cheats. However, many source ports enable cheats for all skill levels.

In some ports and in the original executables, cheat codes may be different on non-QWERTY keyboards. For example, in France, idkfa may be idkfq, because of the AZERTY keyboard layout commonly used there.

In certain source ports, the idfa and idkfa cheats also include a backpack if the player does not have one already.

Some source ports enable both no-clipping cheats (idspispopd and idclip) to function while playing either game.

PrBoom and PrBoom-Plus support the same cheats codes that Boom added and bring three new ones.

Crispy Doom supports all vanilla Doom cheat codes and some new ones (some borrowed from Boom).

Below are Doomsday's cheat-like console commands. As indicated, they are all entered through the console.

Most of Doom Legacy's additional cheat codes are executed via typing them into the console. All the cheat codes below are used this way, excluding the first.

In addition to new cheat codes of its own, EDGE also allows the user to edit the default ones through the language.ldf file. The codes below are the default forms of the new cheats.

As well as supporting the additional Boom and MBF cheats, Eternity adds a number of its own. 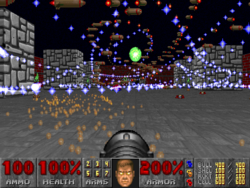 An example of a player using cheats in ZDoom.

By default, ZDoom recognizes all stock cheats for the game being played, but disables them in Nightmare! or multiplayer. They can be re-enabled by setting the console variable sv_cheats to true. Some additional console variables act as cheats in a conceptual sense, such as enhanced aim or single-player respawning, even though treated differently by the engine.

Besides the codes below, vanilla Doom cheats are changed as follows:

Setting the console variable allcheats to true enables cheat codes across games, including Chex Quest, and the Boom codes above.

ZDoom does not support additions or changes to cheat codes via binary DeHackEd patches.

You must put the launch parameter "-classich" in order to use the classic Doom cheat codes.