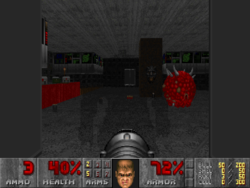 A spectre traps the player in Doom II MAP08: Tricks and Traps.
This article is about the monster in the classic Doom series. For the enemy from Strife, see Spectre (Strife). For other games, see:

Spectres are partially invisible, ethereal beings which, except for their fuzzy, blurred appearance, are exactly the same as the demon in behavior and attributes. They often hide in darkened areas, waiting to startle players. Spectres do not have states or sprites of their own, but instead share them entirely with the demon.

Spectres appear as shimmering beings, acting like a lens which distorts and reflects the light passing around and through their translucent bodies, making them hard to spot in dark areas or against certain textures, such as grey speckled walls. However, in bright areas, they are noticeably visible and spotty. The original README.TXT included with the shareware version of Doom described spectres as "vague, half-formed shapes". 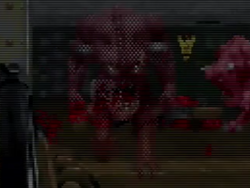 For similar reasons, the Atari Jaguar code base omits support for the partial invisibility effect entirely. This port, along with most others based on it, therefore do not truly contain a spectre monster - though spectres still occur in some of the maps, they are rendered identically to demons and are thus completely indistinguishable from them. Others were selectively removed or replaced with normal demons, without any consistency or discernible pattern.

The PlayStation version, aside from featuring ordinary spectres at both 25% and 100% additive translucency levels, introduced a stronger version of the spectre called the nightmare spectre which uses subtractive blending, giving it a dark green, ectoplasmic appearance. These spectre variants are retained in the Sega Saturn port, though they are indistinguishable from regular spectres in that port as all of the varieties use the same stippled pseudo-translucency effect. This effect depended on a combination of analog signal processing and CRT pixel bleed to look smooth, and does not appear correct on modern hardware.

In Doom 64 specifically, inactive spectres are initially rendered as opaque demons with a green tint (a nod back to the nightmare spectre), becoming translucent upon detecting the player. Upon death, they revert to an opaque state again. Spectres also appear in the Doom 64 Cast of Characters sequence at the end of the game, unlike the spectre in the Doom II cast sequence.

In Doom II for Game Boy Advance, the spectre is notably present despite its absence in its predecessor, due to using an off-the-shelf game engine purpose-built to run on the platform. It is rendered with a bright silhouette and refractive lens-like effect which distorts the background behind it, though it lacks the static noise of the original. However, this effect does not typically make the monster harder to see, but in fact makes it stand out. 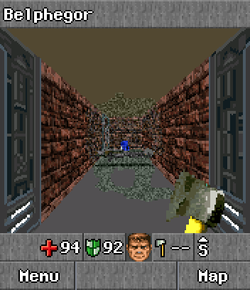 In the BREW 2.0 and 2.1 versions of Doom RPG, the highest tier of the "pinky" class of monsters, the belphegor, is rendered as a spectre rather than appearing as a blue-colored demon like it did in the J2ME builds of the game.

In the IWADs the spectre is first encountered on these maps per skill level:

The IWADs contain the following numbers of spectres per skill level:

Of the maps covered on the Doom Wiki, the following have the highest numbers of spectres in single-player on skills 4-5: