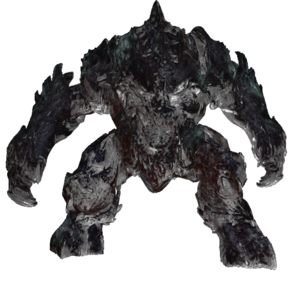 A spectre.
This article is about the monster in Doom (2016). For the enemy from Strife, see Spectre (Strife). For other games, see:

The spectre returns in Doom (2016) as a mostly invisible form of the pinky demon, with identical characteristics to its fully visible counterpart aside from its Predator-like appearance.

The spectre attacks in a manner similar to the pinky, although it prefers to use its invisibility to sneak up on the player before biting them. However, if there is a clear path between the spectre and the player, as well as a sufficient amount of distance, the spectre will also make use of the pinky's charge attack.

While it lacks the extra frontal armor of the pinky, it makes up for it with extra health.

The spectre was created accidentally by Lazarus Labs researchers who transplanted the optic nerve of a cacodemon into a pinky in an attempt to improve its vision. This unexpectedly resulted in limited psionic abilities, including the ability to become invisible. This enabled the specimen created by the UAC to escape its holding pen by fooling a caretaker into believing it had already somehow exited. The gate to its pen was opened to inspect the area, allowing it to leave. It is thought that the spectre proceeded into the Lazarus wave testing facility, where a summoner transported it back to Hell. It is believed to have somehow bred and transferred its acquired traits to its offspring, as the UAC began to encounter numerous spectres on subsequent expeditions.