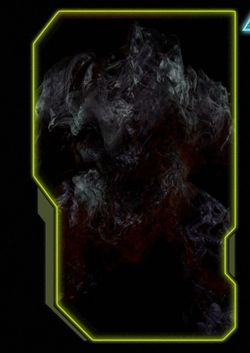 The spectre in the codex
This article is about the monster in Doom Eternal. For the enemy from Strife, see Spectre (Strife). For other games, see:

The spectre is an enemy featured in Doom Eternal, returning from Doom (2016). As with its appearances in past games in the Doom franchise, the spectre is identical to the pinky enemy except for the fact that it is nearly invisible.

The spectre's behavior is identical to that of the pinky, charging forward to attack before stopping, turning to face the player again, and charging again. Unlike the pinky, and consistent with its prior version, it lacks significant armor on its face. The spectre cannot be targeted by the lock-on modification to the rocket launcher unless it is frozen with the ice bomb.

Demonic legends state that the spectre is an "ethereal amalgam" of the pinky, summoned into Hell through the rituals of the Six Sealed Eyes, an order of warlocks descended from a fallen infernal house. They sought to overthrow the Archdemons through the use of long-forbidden black magic. However, their rebellion proved unsuccessful and their members were given unspeakable punishments for their defiance, demonstrating the Archdemons' lack of tolerance for challenges to their authority.

As this is inconsistent with the previous game's explanation that the UAC artificially engineered spectres, it is possibly a retcon. Alternatively, the UAC may have simply never encountered natural spectres, and engineered a nearly identical creature by chance, either through their own unique process, or by unknowingly replicating what had earlier been done by the Six Sealed Eyes.