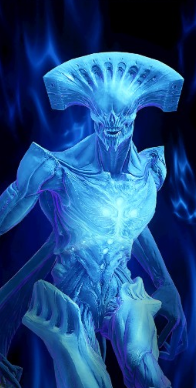 The spirit as it appears in the Codex.

The spirit is an enemy which first appears in The Ancient Gods, Part One, the first downloadable content expansion for Doom Eternal. It possesses other demons in order to specially empower them and causes the demon it possesses to glow blue.

The spirit possesses the body of any demon on the field, granting them enhanced movement speed, projectile speed, damage reduction, and aggression. Additionally, a possessed demon's weak points (if any exist) are rendered unbreakable, and it cannot be faltered; the combined effect makes a possessed demon much more resilient than usual and ensures that it will not stop attacking at full power until it is dead.[1] The player must kill the possessed demon first to release the spirit, and then eliminate it with the plasma rifle's microwave beam mod while it is stunned from the host's death; any weapon or mod other than the microwave beam will harmlessly pass through it. If it is left alone at all, it will immediately look for another demon to possess and the process must be repeated. Killing the spirit with the microwave beam causes it to drop ammo and a blood punch charge.

The spirit cannot, however, attack the player directly and if there are no more demons to possess within its range, it will vanish.

Spirits are the essence of slain Summoners. Having fallen by the Slayer's hand, they are fueled by hatred to persist as a ghost. Unable to affect the physical world in their new forms, spirits possess the bodies of other demons. A spirit fuses its own essence with that of its host, increasing its strength and speed. Even when outside any host, spirits cannot be harmed by conventional means: only sustained, concentrated energy can disrupt them. 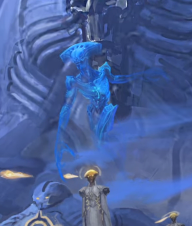 The spirit in the DLC's title art.

The spirit first appeared unnamed and unexplained in the DLC's teaser trailer released by Bethesda on August 7, 2020. It also appeared in the DLC's title art, revealed along with the teaser.