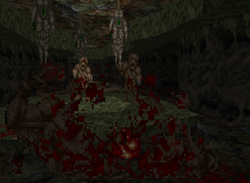 A gooey screenshot of level 1.

Splatterhouse 3D is a 3-episode mod for Doom II using the GZDoom source port, developed and released by Mike MacDee (Impie) from 2016 through 2019. It features atmospheric maps and a plethora of weapons, powerups, and monsters based on those in the Splatterhouse franchise.

Each of the three episodes is based on one of the original Splatterhouse games, embellished by the wad author. The mod comes with a PDF manual with large sections written like the journal entries of Dr. West, detailing the weapons and monsters found throughout the game. It also comes with an older version of the Ketchup Mod for gratuitous blood splatter effects.

Episode 1: Breakup From Hell. While on a field trip for a school project, Rick and Jenny become trapped in the haunted mansion of mad occultist Dr. West. Rick is empowered by the Terror Mask to save Jenny and himself from the undead horrors reawakened by the terror deity's presence.

Episode 2: The Gate of Orpheus. Donning the Terror Mask once again, Rick seeks the home of his traitorous mentor Professor Mueller, who possesses a gateway to hell and the means to bring the ill-fated Jenny back from the dead.

Episode 3: Fall of the House of Taylor. Now a wealthy celebrity, Rick finds his family besieged by demons, zombies, and the revenants of Doctors West and Mueller. He dons the mask one last time, and attempts to settle his feud with the terror deity once and for all.

In addition, Rick can collect Hearts for health, Tomes for willpower (armor), and Terror Masks for Berserk punching power. If Rick is lucky enough to find Jenny's Spirit it will restore him to 100% health and armor.

All of the monsters are new, based on those found in the Splatterhouse games. They use edited sprites from the original games to make the mod feel more authentic.