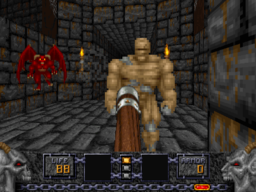 Striking a Golem with the Staff in Heretic E1M1.

The staff is Heretic's basic melee weapon. Using it, the player is able to "poke" an enemy. Prodding an enemy with the staff deals 5-20 damage at short range. When using a Tome of Power, the staff is surrounded by a blue aura that gives it a stronger impact which deals 18-81 damage and has increased knockback to enemies. This weapon is useless against ghosts, even when in power mode.

The staff is primarily a desperation weapon, but while not as powerful as the gauntlets, it can be more effective in dispatching sabreclaws without taking damage due to the lack of the gauntlets' "lock on" effect keeping the player in range of this monster's rapid attacks. It can also be more versatile in certain other situations as it does not hinder player movement while attacking. A useful strategy is to keep walking back and forward while attacking the monster and thus avoiding unnecessary damage from melee attacks.

When powered up, the staff's enhanced knockback can sometimes be useful to force a path through a group of enemies in order to escape from being cornered.

If ammo has run out leaving the player down to only the staff, and no timebombs are available, there is no choice but to retreat in search of more supplies when faced by ghost monsters.

The puff made by the staff without the Tome of Power is the same as the standard bullet puff in the classic Doom games.

In Heretic II, Corvus once more begins his adventure armed with a Durhnwood Staff. However, it has been augmented significantly since the events of the original game, with the addition of a blade on the end making it more of a glaive-like weapon that can be quite effective. It also gains multiple levels of power upgrade and the additional use of pole vaulting to enhance jumps.