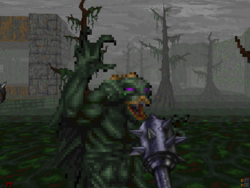 A Stalker attacking the player in Darkmere.
For information about the enemy from Strife, see Stalker (Strife).

The stalker is a serpentine, water-dwelling monster from Hexen, resembling a mythical merman with green skin. It primarily inhabits regions of Cronos with swampy waters, but sometimes inhabits clean water as well. Stalkers prefer to move while submerged beneath the water's surface, but players can discern their location from the occasional surfacing of their coils and the tell-tale rippling sounds in the water. They have 90 hit points, but cannot be damaged while underwater.

"Stalkers are aquatic reptiles with huge talons designed to rend their prey into bite-sized morsels. They can't leave the water, so once you're on dry land you might feel safe. But beware, some Stalkers can fire slime projectiles."
― Hexen instruction manual

Stalkers block the player's movement even when submerged, and this fact can be used to locate them. Their attack consists of standing up from beneath the water, slashing the player, and submerging again, sometimes remaining exposed for a short while after their attack. The stalker's melee attack is powerful, and a pack of them surrounding a player is often deadly. Shots from the Mage's Sapphire Wand stun stalkers momentarily, and continuous fire from this weapon can prevent them from submerging until they die. Other classes are usually better served by well-timed strikes when the stalker emerges.

There is also a second variant of the stalker, referred to as a stalker boss. It appears identical to the normal stalker and has the same hit points, but possesses the ability to throw globs of corrosive acid at the player.

Sufficient damage, or any kill from a player's fourth weapon, will cause the stalker to gib.

In the IWADs the stalker is first encountered on these maps per skill level:

The IWADs contain the following numbers of stalkers per skill level:

The stalker boss is first encountered on these maps:

The IWADs contain the following numbers of stalker bosses: