The status bar is displayed at the bottom of the screen during gameplay and shows the player's status. The status bar can be removed from the screen by maximising the viewport, although it is still visible in automap mode. In the very first alpha version of Doom, the status bar framed the entire screen and was a visual representation of the player character's visor.

In the Doom games the status bar is made of a cement-like texture overlaid with large red characters for key information, graphics for the face of the protagonist, and smaller yellow characters for additional information. 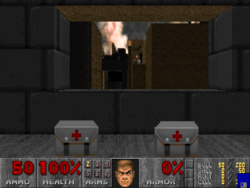 An example of a custom status bar. This example is taken from the PWAD A Fistful of Doom.

The status bar code in the Doom source code is responsible not only for drawing the status bar, but also performs the palette special effects when injured or picking up items, and detects the entry of cheat codes.

Pre-release versions of Doom showed messages to the player and multiplayer chat being performed inside the status bar. This was moved to the heads-up display; however, the Doom source includes leftover variables relating to "status bar chat" and the message display.

In the source code, ST_* is used as a prefix for files and functions associated with the status bar. This trend continues in the IWAD file, where graphic resources relating to the status bar begin with ST. The following resources are used for the status bar:

The setup above is valid for Doom v1.2 and later. In v1.1 and earlier, the status bar is composed of the following images: