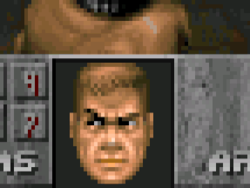 The status bar face in its "normal", full-health appearance. This is what the protagonist of Doom and Doom II looks like without his helmet.

In the Doom games the center of the status bar displays the face of the player character. This face reacts to the environment in the game as follows:

The names of the face graphics use the root STF (status face), plus some text specifying one of several conditions currently being experienced by the player, followed by a digit from 0 to 4 denoting the approximate current health, and possibly an extra digit from 0 to 2 for an alternating animation sequence that makes the face gaze in different directions (forward or to either side) when idle. In the graphic STFST01, for example, the root STF is followed by ST (standard face), then 0 (full health), and finally 1 (looking forward). Face graphics that do not vary with the character's health, such as the invulnerable and dead faces, always carry a single 0 after the specifying text.

The text that specifies what type of face is used includes:

Additionally, STFGOD0 appears while an invulnerability powerup or the iddqd cheat code is in effect. Note that STFOUCH4 is but rarely displayed, and in only unusual circumstances, due to the ouch face bug.

The health values correspond to the player's health percentage:

The graphic STFDEAD0 takes over when the player is killed. 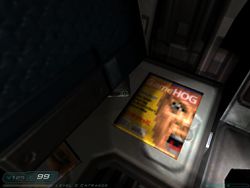