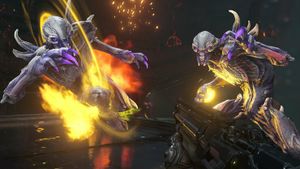 The stone imp is a monster introduced in The Ancient Gods, Part Two. Its appearance is identical to a normal imp aside from its gray rocky skin, and purple eyes and claws.

The stone imp is highly resistant to almost all forms of damage besides the Full Auto modification for the combat shotgun and the Sentinel Hammer, the latter being able to kill them instantly. They are also vulnerable to the chainsaw and can be glory killed when heavily injured.

The stone imp's main attack is a rolling dash - they light themselves on fire, curl up into a ball and charge at the player. The attack is difficult to dodge, but hitting a rolling imp with the Full Auto modification will stop it in its tracks.

Despite appearances, they are just as agile as normal imps.

Imps killed in battle are cast into the volcanic pits of the Burning Abyss, from where they emerge with flesh of stone thanks to the Argent-infused slag. As well as making them impervious to most weapons, this transformation allows the imp to self-immolate in Hellfire.