Strange Aeons is a five-episode partial conversion for ZDoom/Ultimate Doom by Mike MacDee (Impie). It features 45 new maps and a large number of new weapons, powerups, and monsters. Many elements of the wad are based on the works of horror author H. P. Lovecraft, in particular "The Dream-Quest of Unknown Kadath," and "The Call of Cthulhu": as a result, the megawad is very atmosphere-heavy.

Initially, it was planned as a four-episode megawad that would conclude its main story in Episode 3. A beta of the first three episodes saw release on July 22nd, 2015, with the fourth episode being added a month or so later. In 2016, Impie released the fifth and final episode and the PWAD was named as a runner-up in that year's Cacowards.

The player controls the nameless Traveler, a Miskatonic University researcher who has recently lost his son David in a tragic accident. To cope with his loss, the Traveler has begun an obsessive translation of the Kadath Tablets, which appear to have a strong connection to the treacherous Dreamlands. After seeing visions of his son alive and well in a utopian world, the Traveler embarks on a dream quest, traveling across the cosmos through his dreams in the hope of reuniting with his son.

The fifth episode, Out of the Aeons, is a spin-off story. The Traveler returns to the Dreamlands to save his nephew Daniel and prevent him from inadvertently awakening Cthulhu. 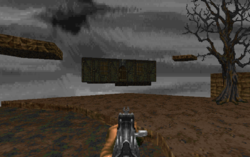 Each of the three episodes takes place in a unique world that is drastically different from the others. The Shattered City has a "broken world" motif, with buildings and rock formations drifting through empty space. The Stagnant Fortress features rusted, dilapidated buildings of the future filled with toxic sludge, crushers, and conveyor belts. The Land That Time Forgot is a prehistoric world with a vaguely Egyptian/Aztec theme. Occasionally these worlds bleed into one-another, such as during the boss battle at the end of World 1, where the Traveler is suddenly transported to World 3. The bonus episode, Plateau of Leng, takes place in an icy, mountainous wasteland populated by gunmen and giant spiders, and serves as the original story's epilogue.

In the fifth episode, the Traveler explores the Underworld, a subterranean haven of undead monstrosities, notable for pillars of light piercing through the ceiling from the surface world above. The final two maps take place in Cthulhu's city of R'lyeh, where mossy rocks and soapstone spires cover the landscape.

Strange Aeons modifies a couple of the original Doom weapons, and replaces most of the weapon sounds.

The entire bestiary has been replaced with modified creatures from Realm 667, many modified to resemble creatures from Lovecraft's Cthulhu and Dream Cycle mythoses. Custom graphics were made for the Episode 2 and 3 end bosses. The vast majority of the level textures are from Chasm: The Rift, as is the majority of the soundtrack and many of the sound effects. The main theme is from Amiga shooter Death Mask. The Traveler's portrait comes straight from Freedoom, and serves the same purpose as an animated health meter.

In addition to references to The Dream-Quest of Unknown Kadath and the inclusion of the Plateau of Leng and R'lyeh, the mod has a number of other Lovecraftian elements.